Best of the Balts: Madis and his friends

It's always nice to meet the locals when you're travelling especially if they're Estonian, young, and having a party. A few weeks ago, we were cycling from Tallinn along the West coast to the Southern islands and desperately looking for a place to spend the night. It was weekend, hot, and we'd already done more than 100 km, when we arrived at a cabin where people were obviously having a party. They made some calls to help us find a place to stay, but apparently everything was booked. The guy who seemed to be in charge - Madis - generously offered to take a shower, pitch our tent, and join the barbecue. So, that's how we learned how Estonians spend their summer nights. We enjoyed the free drinks and the lovely home-made beer snacks.

After some drinks we learned a lot more... Madis was not only a young lawyer but also the double world champion in wife carrying! At first we didn't believe it, but he and one of the girls gave us an instant live demonstration of the difference between the Finnish and the - by far more efficient - Estonian style. Hilarious! Check out Wikipedia for more details!

So, Estonians are crazy about beer, sauna (even when it's hot outside), night-swimming and berry-picking. But especially, they are very generous and hospitable.

Madis and friends, next time you're in Brussels, let us know, and we'll take you to Leuven to taste our Belgian beers and visit our city. Thanks again for your hospitality. We loved it.
Gepost door An op 13:44 Geen opmerkingen: 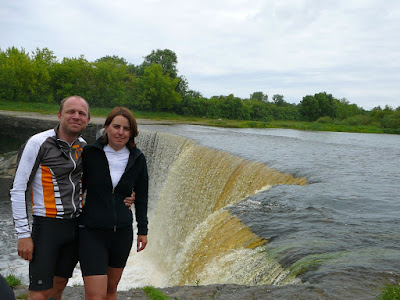